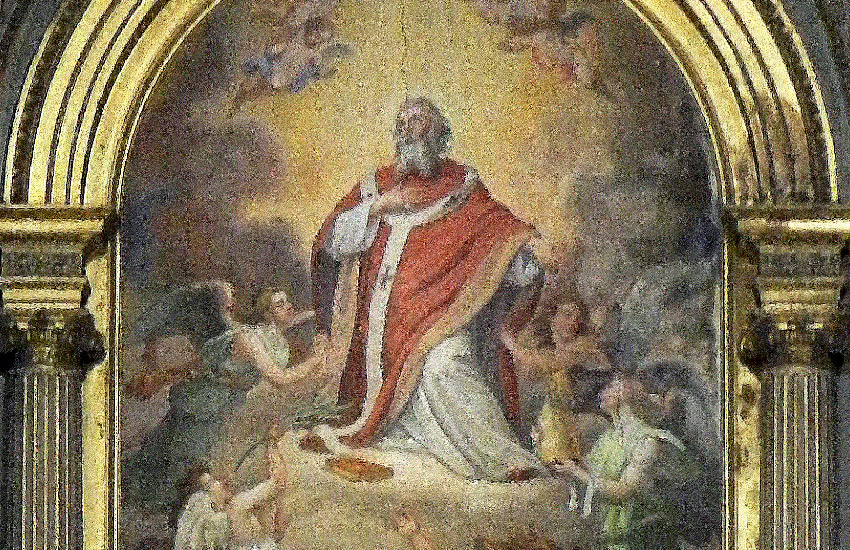 ST. MARCELLUS was priest under pope Marcellinus. whom he succeeded in 308, after that See had been vacant for three years and a half. An epitaph written on him by pope Damasus, who also mentions himself in it, says, that by enforcing the canons of holy penance, he drew upon himself the contradictions and persecutions of many tepid and refractory Christians, and that for his severity against a certain apostate, he was banished by the tyrant Maxentius. He died in 310, having sat one year, seven months, and twenty days. Anastatius writes, that Lucina, a devout widow of one Pinianus, who lodged St. Marcellus when he lived in Rome, after his death converted her house into a church, which she called by his name. His false acts relate, that among his other sufferings, he was condemned by the tyrant to keep cattle in this place. He is styled a martyr in the sacramentaries of Gelasius I. and St. Gregory, and in the Martyrologies ascribed to St. Jerome and Bede, which, with the rest of the Western calendars, mention his feast on the sixteenth of January. His body lies under the high altar in the ancient church, which bears his name, and gives title to a cardinal in Rome; but certain portions of his relics are honored at Cluni, Namur, Mons, &c. God is most wonderful in the whole economy of his holy providence over his elect: his power and wisdom are exalted infinitely above the understanding of creatures, and we are obliged to cry out, “Who can search his ways?” We have not penetration to discover all the causes and ends of exterior things which we see or feel. How much less can we understand this in secret and interior things, which fall not under our senses? “Remember that thou knowest not his work. Behold he is a great God, surpassing our understanding.” How does he make everything serve his purposes for the sanctification of his servants! By how many ways does he conduct them to eternal glory! Some he sanctifies on thrones; others in cottages; others in retired cells and deserts; others in the various functions of an apostolic life, and in the government of his church. And how wonderfully does he ordain and direct all human events to their spiritual advancement, both in prosperity and in adversity! In their persecutions and trials, especially, we shall discover at the last day, when the secrets of his providence will be manifested to us, the tenderness of his infinite love, the depth of his unsearchable wisdom, and the extent of his omnipotent power. In all his appointments let us adore these his attributes, earnestly imploring his grace, that according to the designs of his mercy, we may make everything, especially all afflictions, serve for the exercise and improvement of our virtue.

Connection for our times: One thing that is striking about this holy Saint is the mention of the tepid or lukewarm Christians and their reaction to his insistence on strong penance and mortification. Isn’t that the case in our times? It seems that so many of us are lukewarm in our faith, and lash out at prelates that we think are “too harsh.” But, is there anything we could go through that could compare to the harshness of how mortal sin wounds the Sacred Heart of Our Lord?