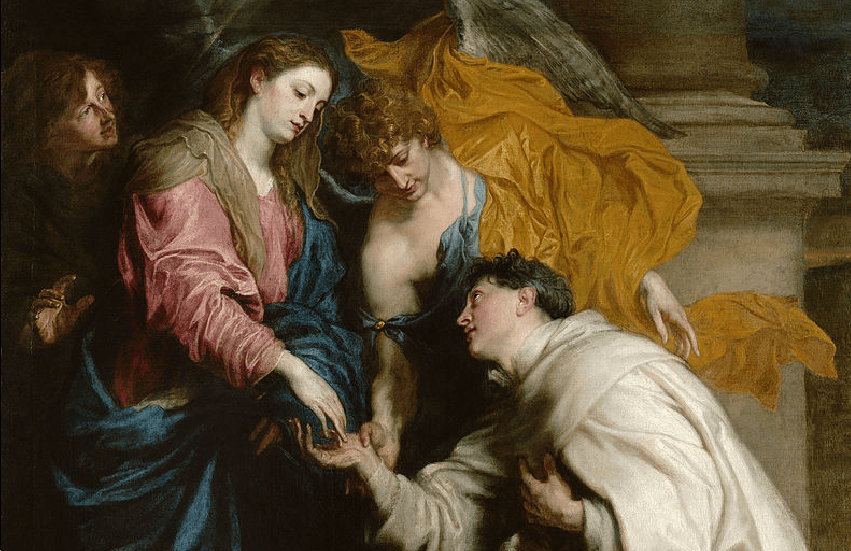 HERMAN from his earliest years was a devoted client of the Mother of God. As a little child he used to spend all his playtime in the church at Cologne before an image of Mary, where he received many favors. One bitter winter day, as little Herman was coming barefooted into church, his heavenly Mother appearing to him, asked him lovingly why his feet were bare in such cold weather. “Alas! dear Lady,” he said, “it is because my parents are so poor.” She pointed to a stone, telling him to look beneath it; there he found four silver pieces wherewith to buy shoes. He did not forget to return and thank her. She enjoined him to go to the same spot in all his wants and disappeared. Never did the supply fail him; but his comrades, moved by a different spirit, could find nothing. Once Our Lady stretched out her hand, and took an apple which the boy offered her in pledge of his love. Another time he saw her high up in the tribune, with the Holy Child and St. John; he longed to join them, but saw no way of doing so; suddenly he found himself placed by their side, and holding sweet converse with the Infant Jesus. At the age of twelve he entered the Premonstratensian house at Steinfeld, and there led an angelic life of purity and prayer. His fellow-novices, seeing what graces he received from Mary, called him Joseph; and when he shrank from so high an honor, Our Lady in a vision took him as her spouse, and bade him bear the name. Jealously she reproved the smallest faults in her betrothed, and once appeared to him as an old woman, to upbraid him for some slight want of devotion. As her dowry, she conferred en him the most cruel sufferings of mind and body, which were especially severe on the great feasts of the Church. But with the cross Mary brought him the grace to bear it bravely, and thus his heart was weaned from earthly things, and he was made ready for his early and saintly death, which took place about the year 1230.

Reflection. — Do not approach our Blessed Mother with set prayers only. Be intimate with her; confide in her; commend to her every want and every project, small as well as great. It is a childlike reliance and a trustful appeal which she delights to reward.