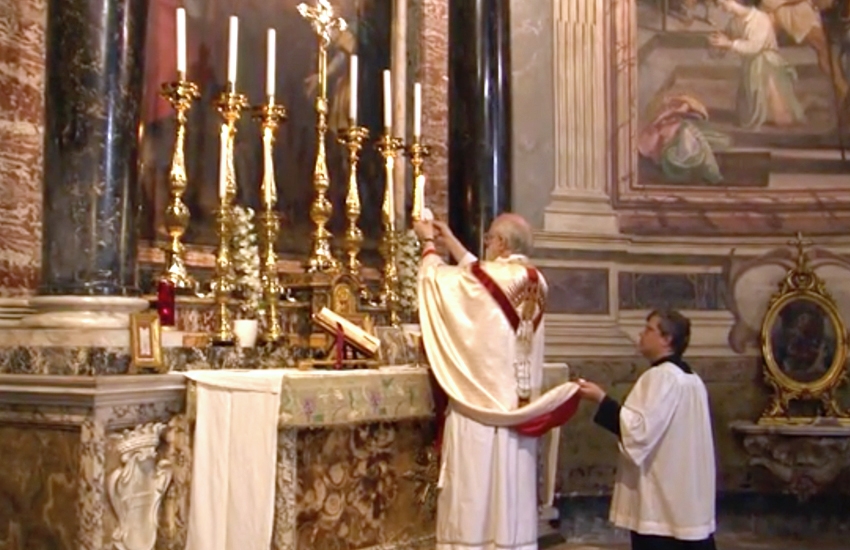 The Feast of Christmas

The First or Midnight Mass

The Lord hath said to Me: Thou art My Son, this day have I begotten Thee. Ps. 2, 1. Why have the Gentiles raged, and the people devised vain things? Glory be …

O God, Who hast brightened this most holy night with the shining of the true light, grant, we beseech Thee, that we may enjoy in heaven the delights of Him whose mystical light we have known on earth. Who with Thee.

Dearly beloved, the grace of God our Saviour hath appeared to all men; Instructing us, that, denying ungodliness and worldly desires, we should live soberly, and justly, and godly in this world, Looking for the blessed hope and coming of the glory of the great God and our Saviour Jesus Christ, Who gave himself for us, that he might redeem us from all iniquity, and might cleanse to himself a people acceptable, a pursuer of good works. These things speak, and exhort: in Christ Jesus our Lord.

With Thee is the principality in the day of Thy strength; in the brightness of the saints, from the womb before the day-star I begot Thee. The Lord said to my Lord: sit Thou at My right and, until I make Thy enemies Thy footstool.
Alleluia, alleluia. Ps. 2, 7. The Lord hath said to Me: Thou art My Son, this day have I begotten Thee. Alleluia.

At that time, there went out a decree from Caesar Augustus, that the whole world should be enrolled. This enrolling was first made by Cyrinus, the governor of Syria. And all went to be enrolled, every one into his own city. And Joseph also went up from Galilee, out of the city of Nazareth into Judea, to the city of David, which is called Bethlehem: because he was of the house and family of David, To be enrolled with Mary his espoused wife, who was with child. And it came to pass, that when they were there, her days were accomplished, that she should be delivered. And she brought forth her firstborn son, and wrapped him up in swaddling clothes, and laid him in a manger; because there was no room for them in the inn. And there were in the same country shepherds watching, and keeping the night watches over their flock. And behold an angel of the Lord stood by them, and the brightness of God shone round about them; and they feared with a great fear. And the angel said to them: Fear not; for, behold, I bring you good tidings of great joy, that shall be to all the people:
For, this day, is born to you a Saviour, who is Christ the Lord, in the city of David. And this shall be a sign unto you. You shall find the infant wrapped in swaddling clothes, and laid in a manger. And suddenly there was with the angel a multitude of the heavenly army, praising God, and saying: Glory to God in the highest; and on earth peace to men of good will.

Let the heavens rejoice, and let the earth be glad before the face of the Lord, because He cometh.

May the oblation of this day’s festivity, we pray Thee, O Lord, find acceptance with Thee: that, by the bounty of Thy grace we may, through this sacred intercourse, be found made like unto Him in Whom our substance is united with Thee. Who with Thee.

In the brightness of the saints, from the womb before the day-star I begot Thee.

Grant, we beseech Thee, O Lord our God, that we, who rejoice to celebrate with these mysteries the nativity of our Lord Jesus Christ, may deserve by worthy living to attain His companionship. Who with Thee.

The Second or Day-Break Mass

A light shall shine upon us this day: for Our Lord is born to us; and He shall be called wonderful, God, the prince of peace, the Father of the world to come; of Whose reign there shall be no end. Ps. 92, 1. The Lord hath reigned, He is clothed with beauty: the Lord is clothed with strength, and hath girded Himself. Glory be …

Grant, we beseech Thee, O almighty God, that we who are filled with the new light of Thine Incarnate Word, may show forth in our deeds that which by faith shineth in our minds. Through the same.

early beloved, the goodness and kindness of God our Saviour appeared: Not by the works of justice, which we have done, but according to his mercy, he saved us, by the laver of regeneration, and renovation of the Holy Ghost; Whom he hath poured forth upon us abundantly, through Jesus Christ our Saviour: That, being justified by his grace, we may be heirs, according to hope of life everlasting: in Christ Jesus our Lord.

Blessed is He that cometh in the name of the Lord; the Lord is God and He hath shone upon us. This is the Lord’s doing; and it is wonderful in our eyes.

At that time, the shepherds said one to another: Let us go over to Bethlehem, and let us see this word that is come to pass, which the Lord hath shewed to us.
And they came with haste; and they found Mary and Joseph, and the infant lying in the manger. And seeing, they understood of the word that had been spoken to them concerning this child. And all that heard, wondered; and at those things that were told them by the shepherds. But Mary kept all these words, pondering them in her heart. And the shepherds returned, glorifying and praising God, for all the things they had heard and seen, as it was told unto them.

God hath established the world, which shall not be moved: Thy throne, O God, is prepared from the old; Thou art from everlasting.

May our gifts, we pray Thee, O Lord, come forth agreeable to the mysteries of this day’s nativity, and my they shower upon us peace; that as He who was begotten as man shone forth also as God, so also may this earthly substance bring us that which is divine. Through the same.

May the Christmas renewal of this sacrament ever restore us, O Lord, Whose miraculous birth did put away the ancient things of mankind Through the same.

A child is born to us, and a Son is given to us; Whose government is upon His shoulder; and His name shall be called the angel of great counsel. Ps. 97, 1. Sing ye to the Lord a new canticle; for he hath done wonderful things. Glory be …

Grant, we beseech Thee, O almighty God, that the new birth, in the flesh, of Thine only-begotten Son may deliver us whom slavery from old doth keep under the yoke of sin. Through the same.

God, who, at sundry times and in divers manners, spoke in times past to the fathers by the prophets, last of all, In these days hath spoken to us by his Son, whom he hath appointed heir of all things, by whom also he made the world. Who being the brightness of his glory, and the figure of his substance, and upholding all things by the word of his power, making purgation of sins, sitteth on the right hand of the majesty on high. Being made so much better than the angels, as he hath inherited a more excellent name than they. For to which of the angels hath he said at any time, Thou art my Son, today have I begotten thee? And again, I will be to him a Father, and he shall be to me a Son? And again, when he bringeth in the first begotten into the world, he saith: And let all the angels of God adore him. And to the angels indeed he saith: He that maketh his angels spirits, and his ministers a flame of fire. But to the Son: Thy throne, O God, is for ever and ever: a sceptre of justice is the sceptre of thy kingdom. Thou hast loved justice, and hated iniquity: therefore God, thy God, hath anointed thee with the oil of gladness above thy fellows. And: Thou in the beginning, O Lord, didst found the earth: and the works of thy hands are the heavens. They shall perish, but thou shalt continue: and they shall all grow old as a garment. And as a vesture shalt thou change them, and they shall be changed: but thou art the selfsame, and thy years shall not fail.

All the ends of the earth have seen the salvation of our God: sing joyfully to God all the earth. The Lord hath made known His salvation; He hath revealed His justice in the sight of the Gentiles.

Alleluia, alleluia. A hallowed day hath dawned for us: come, ye Gentiles, and adore the Lord; for this day a great light hath descended upon the earth. Alleluia.

Gospel • Gospel According to Saint John

He came unto his own, and his own received him not. But as many as received him, he gave them power to be made the sons of God, to them that believe in his name. Who are born, not of blood, nor of the will of the flesh, nor of the will of man, but of God. And the Word was made flesh, and dwelt among us, (and we saw his glory, the glory as it were of the only begotten of the Father,) full of grace and truth.

Thine are the heavens, and Thine is the earth: the world and the fullness thereof Thou hast founded: justice and judgment are the preparation of Thy throne.

Sanctify our oblations, O Lord, by the new birth of Thy only-begotten Son, and cleanse us from the stains of our sins. Through the same.

All the ends of the earth have seen the salvation of our God.

Grant, we beseech Thee, O almighty God, that, as the Saviour of the world, born this day, is unto us the author of divine generation, so He may also be the bestower of immortality. Who with Thee.