The Maternity of the Blessed Virgin Mary

Reflection. — Two of the most common prayers to the Mother of God, the Hail Mary and the Hail Holy Queen, if said frequently and with devotion will enable us to live daily under the protection of Mary.

ST. MELLO is said to have been a native of Great Britain; his mal for the Faith engaged…
byThe Fatima Center 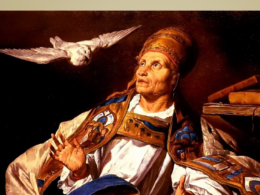 St. Gregory The Great – Pope, Confessor, Doctor of the Church

GREGORY was a Roman of noble birth, and while still young was governor of Rome. On his father’s…
byThe Fatima Center

ST. HILARION was born of heathen parents, near Gaza, and was converted while studying grammar in Alexandria. Shortly…
byThe Fatima Center

ST. LUDGER was born in Friesland about the year 743. His father, a nobleman of the first rank,…
byThe Fatima Center