ST. GILES, whose name has been held in great veneration for several ages in France and England, is said to have been an Athenian by birth, and of noble extraction. His extraordinary piety and learning drew the admiration of the world upon him in such a manner that it was impossible for him to enjoy in his own country that obscurity and retirement which was the chief object of his desires on earth. He therefore sailed to France, and chose a hermitage first in the open deserts near the mouth of the Rhone, afterward near the river Gard, and lastly in a forest in the diocese of Nismes. He passed many years in this close solitude, living on wild herbs or roots and water, and conversing only with God. We read in his life that he was for some time nourished with the milk of a hind in the forest, which, being pursued by hunters, fled for refuge to the Saint, who was thus discovered. The reputation of the sanctity of this holy hermit was much increased by many miracles which he wrought, and which rendered his name famous throughout all France. St. Giles was highly esteemed by the French king, but could not be prevailed upon to forsake his solitude. He, however, admitted several disciples, and settled excellent discipline in the monastery of which he was the founder, and which, in succeeding ages, became a flourishing abbey of the Benedictine Order.

Reflection. —He who accompanies the exercises of contemplation and arduous penance with zealous and undaunted endeavors to conduct others to the same glorious term with himself, shall be truly great in the kingdom of heaven. 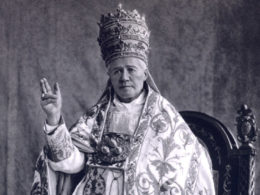 Born Joseph Melchior Sarto on June 2, 1835, this remarkable man described himself in his will, “I was…
byThe Fatima Center 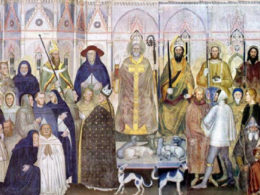 GREGORY VII., by name Hildebrand, was born in Tuscany, about the year 1013. He was educated in Rome.…
byThe Fatima Center

LEONARD, one of the chief personages of the court of Clovis, and for whom this monarch had stood…
byThe Fatima Center

ST. IGNATIUS was born at Loyola in Spain, in the year 1491. He served his king as a…
byThe Fatima Center