God in His holy place; God Who maketh men of one mind to dwell in a house: He shall give power and strength to His people. Ps. 67, 2. Let God arise, and let His enemies be scattered: and let them that hat Him flee from before His face. Glory be …

Almighty, eternal God, Who, in the abundance of Thy loving-kindness, dost exceed both the hopes of Thy suppliants, pour forth Thy mercy upon us, to take away from us those things which our conscience feareth, and to add that which our prayer presumeth not to ask. Through our Lord.

Lesson from the Epistle of blessed Paul the Apostle.

BRETHREN, I make known unto you, brethren, the gospel which I preached to you, which also you have received, and wherein you stand; By which also you are saved, if you hold fast after what manner I preached unto you, unless you have believed in vain. For I delivered unto you first of all, which I also received: how that Christ died for our sins, according to the scriptures: And that he was buried, and that he rose again the third day, according to the scriptures: And that he was seen by Cephas; and after that by the eleven.

Then he was seen by more than five hundred brethren at once: of whom many remain until this present, and some are fallen asleep. After that, he was seen by James, then by all the apostles. And last of all, he was seen also by me, as by one born out of due time. For I am the least of the apostles, who am not worthy to be called an apostle, because I persecuted the church of God. But by the grace of God, I am what I am; and his grace in me hath not been void.

In God hath my heart confided, and I have been helped; and my flesh hath flourished again; and with my will I will give praise to Him. Unto Thee will I cry, O Lord: O my God, be not Thou silent; depart not from me. Ps. 80, 2, 3. Rejoice in God our helper; sing aloud to the God of Jacob: take a pleasant psalm with the harp. Alleluia.

[Christ rebukes the Pharisees. He heals the daughter of the woman of Chanaan; and the man that was deaf and dumb.]

At that time, Jesus going out of the coasts of Tyre, he came by Sidon to the sea of Galilee, through the midst of the coasts of Decapolis. And they bring to him one deaf and dumb; and they besought him that he would lay his hand upon him. And taking him from the multitude apart, he put his fingers into his ears, and spitting, he touched his tongue: And looking up to heaven, he groaned, and said to him: Ephpheta, which is, Be thou opened. And immediately his ears were opened, and the string of his tongue was loosed, and he spoke right.

I will extol Thee, O Lord, for Thou hast upheld me; and hast not made my enemies to rejoice over me: O Lord, I have cried to Thee, and Thou hast healed me.

Look with mercy, we beseech Thee, O Lord, upon our homage, that the gift we offer may be accepted by Thee and be the support of our frailty. Through our Lord.

Honor the Lord with substance, and with the first of all thy fruits: and thy barns shall be filled with abundance, and thy presses shall run over with wine.

By receiving Thy sacrament, we beseech Thee, O Lord, may we experience help in soul and body, that, being saved in both, we may glory in the fulness of our heavenly remedy. Through our Lord. 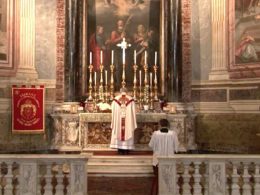 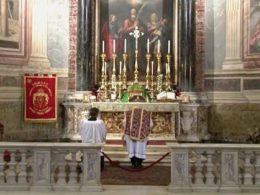 Quinquagesima Sunday Introit • Ps. 30, 3. 4 Be thou unto me a God, a protector, and a…
byThe Fatima Center 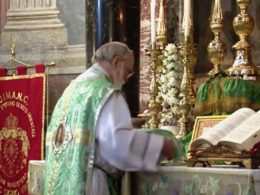 Octave of the Sacred Heart of Jesus

Within the Octave of the Sacred Heart of Jesus Introit • Ps. 32, 11, 19 The thoughts of…
byThe Fatima Center 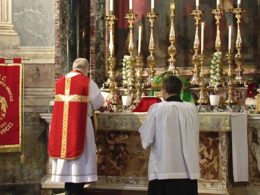