Thursday after the 4th Sunday of Lent

Grant, we beseech Thee, O almighty God, that, chastened by the fasts of our devotion, the devotion itself may also gladden us, so that, with our earthly affections subdued, we may the more easily lay hold upon heavenly things.Through our Lord.

Lesson from the Book of Kings

In those days, a Sunamite woman came to Eliseus to mount Carmel: and when the man of God saw her coming towards, he said to Giezi his servant: Behold that Sunamitess. Go therefore to meet her, and say to her: Is all well with thee, and with thy husband, and with thy son? and she answered: Well. And when she came to the man of God to the mount, she caught hold on his feet: and Giezi came to remove her. And the man of God said: Let her alone for her soul is in anguish, and the Lord hath hid it from me, and hath not told me. And she said to him: Did I ask a son of my lord? did I not say to thee: Do not deceive me? Then he said to Giezi: Gird up thy loins, and take my staff in thy hand, and go. If any man meet thee, salute him not: and if any man salute thee, answer him not: and lay my staff upon the face of the child. But the mother of the child said: As the Lord liveth, and as thy soul liveth, I will not leave thee. He arose, therefore, and followed her.

But Giezi was gone before them, and laid the staff upon the face of the child, and there was no voice nor sense: and he returned to meet him, and told him, saying: The child is not risen. Eliseus therefore went into the house, and behold the child lay dead on his bed. And going in he shut the door upon him, and upon the child, and prayed to the Lord. And he went up, and lay upon the child: and he put his mouth upon his mouth, and his eyes upon his eyes, and his hands upon his hands: and he bowed himself upon him, and the child’ s flesh grew warm. Then he returned and walked in the house, once to and fro: and he went up, and lay upon him: and the child gaped seven times, and opened his eyes.

And he called Giezi, and said to him: Call this Sunamitess. And she being called, went in to him: and he said: Take up thy son. She came and fell at his feet, and worshipped upon the ground: and took up her son, and went out, And Eliseus returned to Galgal.

Have regard, O Lord to Thy covenant, and forget no to the end the souls of Thy poor. Arise, O Lord, judge Thy own cause: remember the reproaches of Thy servants.

At that time, Jesus he went into a city that is called Naim; and there went with him his disciples, and a great multitude. And when he came nigh to the gate of the city, behold a dead man was carried out, the only son of his mother; and she was a widow: and a great multitude of the city was with her. Whom when the Lord had seen, being moved with mercy towards her, he said to her: Weep not. And he came near and touched the bier. And they that carried it, stood still. And he said: Young man, I say to thee, arise. And he that was dead, sat up, and began to speak. And he gave him to his mother. And there came a fear on them all: and they glorified God, saying: A great prophet is risen up among us: and, God hath visited his people.

O Lord, make haste to help me: let all those be confounded that desire evils to Thy servants.

Purify us, O merciful God, that the prayers of Thy Church, which are pleasing to Thee, may become the more pleasing from the purified hearts with which they bring the gifts of devotion. Through our Lord.

O Lord, I will be mindful of Thy justice alone; Thou hast taught me, O God, from my youth; and unto old age and gray hairs, O God, forsake me not.

Suffer not Thy heavenly gifts, we pray Thee, O Lord, to become the occasion of judgement to those who receive them, for Thou hast provided them unto the healing of Thy faithful. Through our Lord. 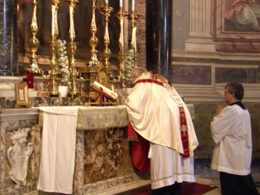 Feast of St. Elizabeth of Portugal 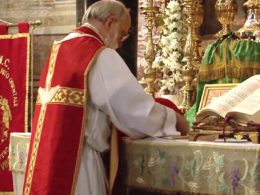 Feast of St. John the Evangelist

Introit • Ecclus. 15, 5 In the midst of the church the Lord opened his mouth: and filled…
byThe Fatima Center 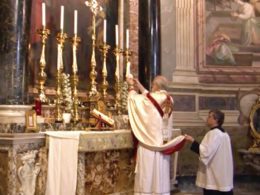 Introit • Ps. 8, 6 Thou hast made him a little less than the angels: Thou hast crowned…
byThe Fatima Center 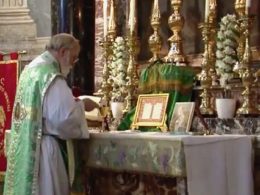 Ferial Day – Twenty-first Sunday after Pentecost Introit • Esther 13, 9,10, 11 All things are in Thy…
byThe Fatima Center