What we hear mostly today is the positive, without sin and hell mentioned while thousands upon thousands of souls are headed for hell because of sinful birth control and abortion.
Today many have been enslaved by “false” obedience.
… Father J. Horvath

Father J. Horvath recently wrote to The Fatima Crusader and brought to our attention the following quotations and asks that we all do our part and that we pray for each other.

“Wars are a punishment from God for sin.”
… Jacinta of Fatima

“You and I know that many are walking down the aisle with mortal sins on their souls. They believe in abortion and sinful birth control, and accept the morals of the world.”
… Silvio Cardinal Oddi

“Not to oppose error is to approve of it, and not to defend truth is to suppress it, and, indeed, to neglect to confound evil men, when we can do it, is not less a sin than to encourage them.”
… Pope Felix III

“He that sees another in error, and endeavors not to correct it, testifies himself to be in error.”
… Pope St. Leo I

“The power of evil men lives on the cowardice of the good.”
… St. John Bosco

“It is a great gain when error and false teachers are exposed, for, then, they cease to deceive the simple.”
… Cardinal John Henry Newman

“Medicinal rebuke must be applied to all who sin, lest they should either themselves perish, or be the ruin of others … Let no one, therefore, say that a man must not be rebuked when he deviates from the right way, but that his return and perseverance must only be asked for from the Lord for him … Severe rebuke should be medicinally applied to all by us that they perish not themselves, or that they may not be the means of destroying others.”
… St. Augustine

“Rebuke those who are unruly, comfort the feeble-minded; support the weak; be patient to all men.”
… 1 Thessalonians 5:14

“If the faith is in imminent peril, prelates ought to be accused by their subjects, even in public.”
… St. Thomas Aquinas 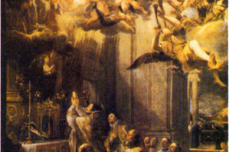 A statesman’s warning
If religious books are not widely circulated among the masses in this country, and if the people do not become religious, I do not know what is to become of us as a nation. And the thought is one to cause solemn reflection on the part of every patriot and Christian. If truth is not diffused, error will be; if God and His Word are not known and received, the devil and his works will gain the ascendancy; if the evangelical volume (Scripture) does not reach every hamlet, the pages of a corrupt and licentious literature will; if the power of the Gospel is not felt through the length and breadth of the land, anarchy and misrule, degradation and misery, corruption and darkness, will reign without mitigation or end.