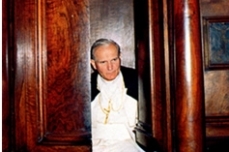 During the Great Miracle of the Sun at Fatima, Our Lady announced: “I have come to warn the faithful to amend their lives and to ask pardon for their sins. They must not offend Our Lord any more as He is already too much offended.”

We can all help make peace in the world by being reconciled with our brothers and above all by being reconciled with God. This reconciliation with God is achieved through the Sacrament of Confession. Pope John Paul II on Dec. 2, 1984, published his Apostolic Exhortation on this great Sacrament as a follow-up to the 1983 Synod. He teaches again that INDIVIDUAL CONFESSION OF MORTAL SINS to a CATHOLIC priest is NECESSARY for these GRAVE sins to be forgiven.

The Polish Bishops have petitioned the Holy Father to make an act of Collegial Consecration to Mary’s Immaculate Heart on three separate occasions. In November 1981, the American Bishops have also decided to ask the Holy Father to make this Collegial Consecration. Some Bishops from Canada and other parts of the world have also petitioned the Holy Father, Pope John Paul II to make this Act of Homage in honor of Our Lady. Pope John Paul II, when a Cardinal, himself joined the Polish Bishops in petitioning the Holy Father. But as we can see from other articles in this issue there are still some difficulties and more prayers are needed.One of the intentions of the FATIMA CRUSADE is to pray for the Pope and the Catholic Bishops of the world so that they, very soon, will one special day consecrate Russia to the Immaculate Heart of Mary. According to Sister Lucy of Fatima, when this is done in this manner, then Russia will be converted to the Catholic Faith and there will be peace.

God wants to establish and spread in the world devotion to the Immaculate Heart of Mary. God wants this public Act of Homage by HIS Church, through this Collegial Act of Consecration, to be the occasion of Russia’s conversion — conversion away from the leadership of its Militant Atheistic rulers and conversion to the Catholic Faith and membership in the One True Church of Jesus Christ. This conversion and peace will be seen throughout the world as coming to mankind, not through human endeavor, but rather through the action of God in human history. It will be seen also that it is not by our merits but rather through the merits and prayers of our Blessed Mother. Thus we will be more than ever grateful to and loving towards our Heavenly Mother’s Immaculate Heart. Thus will devotion to Her Heart be further spread and more firmly established. This spread of devotion to Our Lady will in turn cause more souls to be saved because as St. Alphonsus says that it is impossible for a true client of Mary to be lost eternally if he is faithful in honoring and recommending himself to Mary Most Holy. The Salvation of more souls gives greater glory to God.

St. Augustine comments on devotion to the saints by saying that God wants to give certain favors to men, but men do not deserve some of these favors. So God will only grant these special favors through the merits of the Saints. In our case, mankind does not deserve the gift of peace, but God will grant mankind this gift through the merits of the Immaculate Heart of Mary. We must ask Her to pray to God on our behalf for the conversion of Russia and for peace in the world.

God then will show the world that HE is, in fact, the Master of Human History by granting peace to the world when Russia is consecrated in the form HE asked for, through the Message of Fatima. God also will be giving public recognition to men on earth that this peace is given as a result of Mary’s prayers and merits. God, at the same time, will again give a new sign to all men that the One True Church HE recognizes is the Catholic Church under the Pope and the Bishops who are in Communion with the Pope. As it will be through this Act of Consecration of the Pope and Bishops that peace will be given to the world.

Let us redouble our prayers that this Collegial Act of Consecration be made very soon, before the whole world otherwise suffers a third world war, nuclear destruction of various nations and enslavement to Russian Militant Atheism. Let us do all that we can to see to it that this Message of Fatima is known and practiced by all people. Let us work to circulate this magazine and other Fatima Crusade materials to everyone. Let us respectfully ask our Bishops to join the Pope in Consecrating Russia to the Immaculate Heart of Mary. Let us ask our friends, neighbors and relatives to sign our petitions to the Bishops. Passing out tapes, leaflets, booklets, books and magazines; prayer and sacrifices; petitioning our Bishops and circulating petitions; pledging ourselves to Our Lady and getting others to sign the pledge on page 38 of this issue; keeping the Five First Saturdays and Block Rosaries and organizing Fatima Crusade prayer vigils are all important.