In 1830 the Blessed Mother appeared three times at the motherhouse of the Sisters of Charity of St. Vincent de Paul on the rue de Bac in Paris. She manifested Herself to the humble postulant Sister (now Saint) Catherine Labouré. Here is how the Saint described the encounter when the Medal of the Immaculate Conception was revealed: 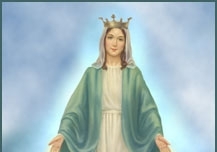 “Her feet rested on a white globe…. I saw three rings on each of Her fingers, graduated in size, the largest one near the base of the finger, one of medium size in the middle, the smallest one at the tip set with gems of proportionate size, some larger and others smaller… the larger gems emitted greater rays and the smaller gems smaller rays that streamed upon the white globe at Her feet. I could not express… what I saw, the beauty and the brilliance of the dazzling rays…. An oval frame formed round the Blessed Virgin. Within it was written in letters of gold: ‘Oh Mary, conceived without sin, pray for us who have recourse to Thee’…. At this instant the tableau seemed to turn, and I beheld the reverse of the Medal; a large M surmounted by a bar and a Cross; beneath the M were the hearts of Jesus and Mary, the one crowned with thorns, the other pierced by a sword. Twelve stars encircled the whole. Then a voice said to me; ‘Have a medal struck after this model. All those who wear it will receive great graces; they should wear it around the neck. Graces will abound for those who wear it with confidence.'”

The front of the Medal represents Mary Most Holy standing on the earth, Her foot crushing the head of the serpent, and Her hands outstretched in a gesture of motherly compassion to all who ask Her assistance. The prayer reflects Her title as the Immaculate Conception defined infallibly twenty-four years later on Dec. 8, 1854 by Venerable Pope Pius IX in his encyclical Ineffabilis Deus. The rays of light from Her hands symbolize the graces She is eager to bestow on those who wear Her Medal and pray to Her.

Within two years, having been given the approval of the Archbishop of Paris, the first medals were made and distributed in France. Immediately blessings began to shower down on those who wore it and it quickly became known as the ‘Miraculous Medal’. In just a few years, millions were being distributed. No sacramental of the Church had made such an impact on the Church since the Rosary had routed the Albigensians and the Turks. It works miracles literally and seems to specialize in the impossible, the conversion of the hardened sinner, the care of the hopelessly ill. With the exception of the Holy Cross, no other Christian symbol was ever so widely multiplied, or was ever the instrument of so many marvelous results.

Graces given to Those Who ask for Them

Some of the graces that St. Catherine suggested that people should ask of God included: The grace of a cheerful disposition, the grace to recognize and accept the trials of everyday life as blessings from God; to be contented with one’s state in life; to understand and appreciate the Holy Sacrifice of the Mass and especially ‘to love God as much as Our Lady wants me to’.

St. Catherine Labouré, Intimate with the Mother of God

St. Catherine Labouré, who stated that she saw Mary “in flesh and bone” and had the privilege of kneeling at Her knee and resting her hands in Our Lady´s lap, a favor not granted to any other seer, was born during the ringing of the Angelus on May 2, 1806. Her earthly mother died when she was only nine years old. She was witnessed to have embraced a statue of the Mother of God and saying, “Now you will be my Mother!” and fostered a lifelong desire to see Our Lady. It was the constant petition of her prayers and she was serenely confident it would be realized.

St. Vincent de Paul visited her in a dream when she was eighteen and she entered the order he had established on January 22, 1830 at the age of twenty-three. St. Catherine considered the apparitions in proper perspective, not as a personal favor to herself (though in a sense they were) but rather as a general boon to mankind. She only considered herself as “an instrument” and she made her confessor promise to keep her identity secret, a secret kept even from her fellow religious for forty years.

St. Catherine also had the gift of prophecy, and one of her prophecies yet to be realized concerns a great triumph of Our Lady: “Oh, how wonderful it will be to hear, ‘Mary is Queen of the Universe….’ It will be a time of peace, joy and good fortune that will last long; She will be carried as a banner and She will make a tour of the world.”

The simple and powerful heaven-sent prayer of the Miraculous Medal is usually said three times together: “O Mary, conceived without sin, pray for us who have recourse to Thee.”

Some material in this article was taken from the book:
Saint Catherine Labouré of the Miraculous Medal
by Fr. Joseph I. Dirvin, C.M.
1958 Farrar, Straus & Cudahy, Inc.

RITE of Blessing and Imposing the Holy Medal of the Immaculate Virgin Mary commonly called “the Miraculous Medal” (S.R.C., April 19, 1895)

V. Our Help is in the name of the Lord,
R. Who made heaven and earth.
V. The Lord be with thee,
R. And with thy spirit.

LET US PRAY. — Almighty and merciful God, who through numerous appearances of the Immaculate Virgin Mary on the earth, has deigned to work wonders continually for the salvation of souls, graciously bless † this symbolic Medal; that those who meditate on it piously and wear it devoutly may both experience Her protection and obtain Your mercy. Through Christ Our Lord. Amen.

The priest then sprinkles the Medal with holy water, and afterward imposes it, saying:

Receive this holy Medal, wear it faithfully and treat it with due veneration; so that the most pious and Immaculate Queen of Heaven may protect and defend thee, and, ever renewing the wonders of Her goodness, may mercifully obtain for thee whatever thou humbly ask of God: that thou may rest happily in Her maternal embrace throughout life and in death. Amen.

He then continues:
Lord, have mercy. Christ, have mercy. Lord, have mercy.
Our Father.
V. And lead us not into temptation,
R. But deliver us from evil.
V. Queen conceived without original sin,
R. Pray for us.
V. Lord hear my prayer,
R. And let my cry come unto Thee.
V. The Lord be with thee,
R. And with thy spirit.

LET US PRAY. — O Lord Jesus Christ, who has vouchsafed to glorify by numberless miracles the Blessed Virgin Mary, Immaculate from the first moment of Her conception, grant that all who devoutly implore Her protection on earth, may eternally enjoy Thy presence in Heaven. Who, with the Father and Holy Ghost, lives and reigns, God, for ever and ever.  Amen.