Among Mary’s Gifts The Green Scapular 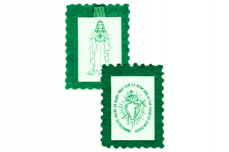 Let me tell you the story of how I discovered the Green Scapular. This is my only way of trying to spread a true and tender love of Her Immaculate Heart and of paying my debt to Her. Some years ago, before penicillin was in use, I was lying in a hospital very ill with pneumonia. I began to hemorrhage and the doctors decided to operate as a last resource. Then a little nun came into my room.

“Father, have you great faith in the Mother of God, especially in Her Immaculate Heart? If so, you can be cured.”

“Through the Green Scapular.”

“Four years ago, Father, I was operated on for cancer. I was so filled with it, that they just closed me up and sent me away to die. Then I prayed to Our Lady of the Green Scapular; grew tired of waiting to die and came back to work. I am cured, Father. Do you want me to give you a Scapular?”

With that she put one over my head. A feeling of tremendous confidence poured into me and the bleeding stopped. Two days later, in the X-ray room, they asked me when the hemorrhage had ceased. When I replied that it was a matter of a couple of days, they expressed great surprise.

“You have a wound that is six months healed and there is no other mark.” Today even the scars are gone. No wonder I speak of an unpayable debt to Her Immaculate Heart. Since then I have done everything possible to foster this devotion. To my great joy and amazement, those to whom I have spoken of the Green Scapular have become more zealous than I. Never have I seen the equal of the faith and confidence of these new apostles of Mary.

During May, I asked the rector of St. Patrick’s, Toronto, for permission to speak of it at the Wednesday devotions. I had a thousand Green Scapulars on hand, but no one thought that more than thirty would be asked for. The thousand were gone the first morning. The room where we distributed them was so jammed that I feared someone would be injured. The rest of the day I was besieged on all sides for more. Foolishly, I showed the one I had for myself and it was quickly snatched from my hand.

The Green Scapular is the story of Sister Justine Bisqueyburu. An orphan in early life, she was adopted by a wealthy relative who left her his fortune. Her greatest day of joy was November 27, 1839, when she entered the novitiate of the Daughters of Charity of St. Vincent de Paul in Paris. Her Sisters in religion are stationed in Maryland.

They can tell you much better than I the story of a Sister who inspired love and emulation in everyone who met her. One who was a confidante of Pope Pius IX in the dark days preceding his imprisonment in the Vatican; one who was the admiration of the Mohammedans of North Africa; the recipient of the flattering imitation of the famous Florence Nightingale on the battlefields of the Crimea. They can tell you the great efforts she made to keep her identity unknown; how her secret was revealed.

They will repeat the description of the Mother of God, standing in all Her beauty before the young novice, and returning again and again until the Scapular was made and distributed. Telling the young Sister that the Scapular could be blessed by any priest, carried or worn on the person, even left in one’s room.

The particular power of this Scapular is that of conversion, to bring Her Son into the hearts of men.

The prayer, and this can be said in favor of another, is: “Immaculate Heart of Mary, pray for us now and at the hour of our death.”

Ten years after the manifestation of the Miraculous Medal to Sister Catherine Labouré in 1830, the Blessed Mother entrusted the Green Scapular of the Immaculate Heart to Sister Justine Bisqueyburu, likewise a Daughter of Charity of St. Vincent de Paul.

The manner of using the Scapular was indicated by the Blessed Virgin. Since it is not the badge of a confraternity but simply a double image attached to a single piece of cloth and suspended from a cord, investiture is not required. It suffices that it be blessed by a priest and worn by one for whom it is intended. It may be placed in the clothing, on the bed, or simply in the room.

The only prayer is the inscription surrounding the heart on the reverse of the Scapular: “Immaculate Heart of Mary, pray for us now and at the hour of our death.” Although wonderful graces are obtained, they are proportionate to the confidence with which it is given.

The Green Scapular was twice approved by Pope Pius IX, in 1863, and again in 1870, when he said: “Write to these good Sisters that I authorize them to make and distribute it.”

Reports of conversions and cures attributed to the Green Scapular should be sent with details of time, place and persons to the Daughters of Charity, care of the address below.
Nihil Obstat: E.A. Cerny, S.S., S.T.D.
Censor Librorum
Imprimatur: Lawrence Cardinal Shehan, D.D.
Archbishop of Baltimore, September 18, 1962